Differential Pressure (DP) transmitters can be traced back to the 1950s. Since then they have served as one the most popular technologies for fluid level measurement and have left their mark in process industry. The application range is vast and varies from chemical, petrochemical, and refineries to electric power generation and more. Over the years, Differential Pressure transmitters have single handedly dominated the worldwide market of process level measurement instruments with the largest sales volume. DP transmitters have gained popularity as they are versatile, inexpensive, and operationally simple. The panel operators find it extremely easy and convenient to monitor and operate the equipment.

With the emergence of newer technology and constant experiments in level measurement instruments, modern devices have been developed. Former mechanical and pressure based working principle has been replaced by latest techniques like Non-contact Radar, Ultrasonic and Guided Wave Radar which make use of microprocessor based digital electronics. The extended advantages of such digital automated systems include inbuilt diagnostic, control, and communication substantiating it to be more reliable with minimum downtime. Therefore, these systems have been finding their own share in the process industry applications.

The comparison between traditional Differential Pressure Level Transmitters and Guided Wave Radars for liquid level measurement applications can be made by analyzing them individually.

Originally developed for liquid flow measurement applications, the DP transmitters later set up their application in liquid level measurement. This is done by gauging hydraulic head pressure which is nothing but the pressure exerted by a column of liquid in the vessel. The DP cell reading is calibrated into liquid level using pre-assumed stable liquid density or Specific Gravity (SG) in the vessel. Uses of DP transmitter for level measurement can be studied considering following two cases:

In the case of an open tank DP application, the pressure exerted at the bottom of the tank by a known density liquid is measured and converted into liquid level scale by calibration. This method measures the static head of the liquid against the atmospheric pressure. Theoretically, the pressure exerted by each foot of water is 0.433 pounds per square foot (psf). Using this relationship along with density of liquid under measurement the level can be easily determined by monitoring the pressure.

On the other hand, closed tank DP applications require two cells of differential pressure level transmitters to be connected to two different measurement points. The high-pressure side of the sensor is connected to the bottom of the tank, whereas the low-pressure side is connected to the vapor space at the top. Pressure detected by these two cells is sent to the control system of the plant where the differential pressure is calculated and used to determine the liquid level. This method may introduce some error as it involves two independent measurements. Inaccuracy in either of the two readings can incur error in the final result. Another point to be noted is the Specific Gravity (SG) of the liquid relative to the actual temperature of the liquid and the pressure of the gas must be considered. Any change in liquid temperature or/and pressure causes drift in liquid’s SG resulting in an inaccurate measurement. Change in the SG of water with respect to temperature is shown in the graph below. 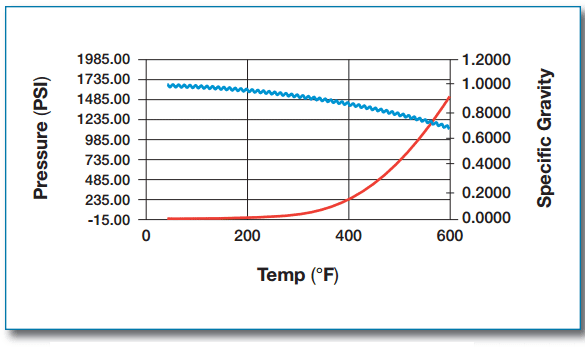 Various aspects related to DP transmitters that may lead to tricky measurement are listed below:

Guided Wave Radar is a revolutionary method of liquid level measurement in which high-frequency electromagnetic waves are guided to travel from transmitter to the material to be measured. It works on the principle of Time Domain Reflectrometry (TDR). In TDR, a pulse is transmitted to the measurement vessel using a cable or rod. The pulse gets reflected where the cable has an open or short circuit. The distance of the reflecting object/surface can be easily calculated by measuring the time difference between the transmitted pulse and the arrival of the first reflection echo and knowing the speed of light. GWR operates on the same theory. 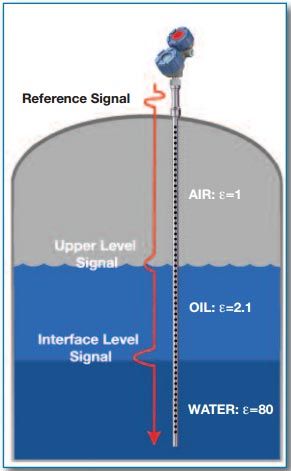 The dielectric constant of air is 1 whereas it varies from liquid to liquid and has a higher value than that of air. The GWR probe has certain characteristic impedance when in air and changes when inserted in liquid, Thus, as a high-frequency signal travels down the probe it gets reflected at the air-liquid surface as a result. The amplitude of the reflected wave is proportional to the conductivity of the process medium. Extremely sensitive and high-speed electronics is essential for capturing the transit time of the pulse and calculating liquid level.

The relative comparison of DP transmitters and GWR can be summarized as below.

DP transmitters served the best in level measurement applications and undoubtedly ruled the market for almost half a century. However, newer technology with added advantages and reliability in the form of Guided Wave Radar systems has started making an impact in the process industry. Tens of thousands of GWR units have already been sold to top companies worldwide and with this exponential growth, it will lead the industry shortly.

Advanced technological development makes us capable of measuring almost anything but accuracy can only be achieved by selecting the right instrument and measuring the right parameters.